Many critics have highlighted the gulf between the experience of architecture and its representations via photography, suggesting a more humanistic and temporal portrayal. My research questions whether, in pursuing alternatives to conventional, commercial architectural photography, a more dynamic view can be revealed, one that is closer to the experience of encountering the built environment: episodic, transient and in flux.

I believe temporality and motion are indicative of the life of a building: both habitually omitted from traditional commercial representations. Practical and conceptual challenges directed me to techniques depicting ‘still’ and ‘moving’, that intersect with several of photography’s discourses: the evidential value of images constructed over time, the perception of movement in still photography and negotiations between description and creativity.

My methodology is an empirical investigation drawing on principles of the scientific analysis of motion (chronophotography): interpretive, yet with evidential rigour. This allies to Henri Bergson’s concept of duration, Futurism, Cubism and cinematic animation, whence I take the portrayal of motion and multi-point perspectives in still images.

By identifying examples from painting and illustration, my temporal approach builds up images over time, utilising observation, interpretation, editing and presentation. My subject matter is limited to what is found and what appears during each session; from this bricolage of serendipitous events selections are made throughout the practice’s reiterative process. I argue the case for appropriating the artist’s licence to interpret, producing an abbreviation of a longer period while remaining informative. I challenge Kracauer’s contention that the true ability to depict the city is exclusive to cinema, by using a static medium to represent ever-changing landscapes populated by transient characters in ephemeral scenes.

Finally completed viva, corrections and conferment. Graduation was on Tuesday, which I was very pleased to share with both my family, and with (a few of the) friends who have been on a similar journey since we first met way back in September 2012

I have added a page to this website that contains all the images in my thesis that are examples of my practice. https://insightimages.wordpress.com/thesis-illustrations-of-practice/

The blurring of passing people has proved an interesting challenge: to decide the right amount to anonymise people on private property, but still retain a degree of recognisability. I want to keep some character, to suggest who they are, what they look like, but with enough abstraction to allow sufficient scope for the viewer’s imagination. Images on the public street don’t have the same restrictions of privacy (in the U.K.), but I still prefer some blur to show movement, direction and temporality.

The image above is a detail from a larger image (below)

This is approximately half (right-hand side) of a longer series. Linear collage breaking ‘4th wall’ by including people close to camera. Exposures at different times reflected in changing light, clouds and shadow angles. Oxford Road, Manchester, U.K. 2017

Some of The University of Manchester’s Victorian buildings along Oxford Road. Includes part of the Whitworth Hall and Manchester Museum. Twenty images, taken over a period of ten minutes, collaged together to form one panorama from multiple perspectives. 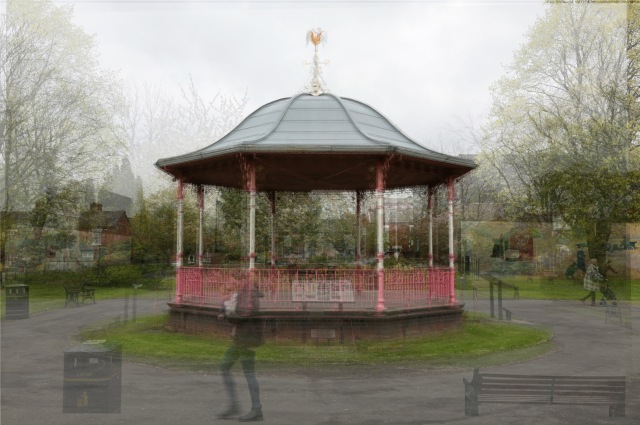 An image composed of two framings. One for the lower (exterior) portion (two exposures – the first includes pedestrians on left side and far right, the second for the traffic trails). The other is a composite of 7 exposures for the upper floors, showing the people framed by the windows over a 20 minute period, as they pack up at the end of the working day (4.40 – 5pm).

The location is the Royal Bank of Scotland building on Deansgate, Manchester

A single two-second exposure of the central concourse of Piccadilly Station, Manchester